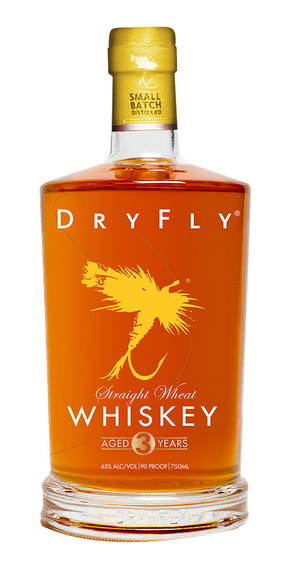 The first whiskey that Dry Fly ever created. With its 100% wheat mashbill, this is the perfect whiskey for someone looking for a light, smooth, easy drinker. Made completely from local grains, it truly is a wonderful offering.

At first appearance, this whiskey shines bright like a freshly polished copper penny. On the nose, it is slightly spicy and after a bit of time, the nose revealed big caramel tones, with hints of butterscotch pudding, tangerines, almonds, tupelo honey and hay. On the palate, neat this whiskey was very soft, almost like a baby's blanket caressing my tongue, with freshly baked orange scones, cinnamon toast, white pepper and peppermint notes.

Specifications
Proof
90
Still Type
Their still, manufactured in Goppingen, Germany, is a Christian Carl pot still with multiple rectification columns. It has a 450-liter capacity and they expect an annual output of approximately 3,500 cases of 12/750 ML bottles.
DistillateSource
Wheat
Aging
18 months in new American oak casks

While cruising through Missoula's Grizzly Liquors to find some Thanksgiving whiskey, someone pointed out that the Dry Fly Wheat Whiskey had made an appearance. Sure enough, I found it tucked in between some Jack Daniels bottles near the Rogue Dead Guy Whiskey.

Tasting and writing about new, craft-distilled whiskeys can be a perilous job. It's not cheap, afterall, and you just never know what you're going to get. What I discovered fairly early into my bottle of Dry Fly whiskey was a nicely rounded, very palatable drink for a two-year-old whiskey. I couldn't tease out a lot of nuances, probably due to the onset of a head cold, but I found the flavors present to be intriguing and fun to try and identify.

I'm not all that familiar with wheat whiskeys as much as bourbons and rye whiskeys, but I do notice the wheat is softer and seems to give off a toasted biscuit flavor that I find very pleasant to sip on. It's very different from other whiskeys, and perhaps Dry Fly will be able to brand around this, although I hear they might be coming out with a Bourbon next, as they wait for the single-malt whiskey to age five years.

We sipped this whiskey in Reidel's whisky glasses, and it gave off a perfume of wood and spice with some vanilla creme brule creaminess on the nose and in the taste. There was not as much heat as I anticipated, but this was aged for two years in charred-whiskey barrels.

For fun, I tried this whiskey with Coke and found it to be a nice pairing, with some of the biscuit flavors I mentioned earlier playing well with the caramel and cola flavors.

For my tastes though, this whiskey is a sipper, and at less than $50 a bottle, it's a nice, local whiskey to serve to visitors, especially during the holiday season. 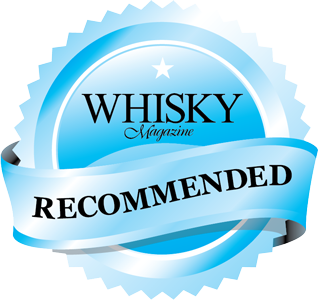 "A completely different whiskey from the usual even from many microdistilleries these days. Made from 100% locally sourced Washington Wheat (rather than the many attempts at corn whiskey or bourbon) and using the "farm to bottle" green/environmental approach working with local people and resources. Using a small (450 liter) Christian Karl Copper pot still."

Appearance: Amber gold color, very clear. Darker than a four year-old bourbon. Thin edge line on the glass when you swirl it, smooth layer of whiskey on swirling.

Taste: Sweet, smooth start, almost fatty (in a good way) mouthfeel, biscuits yeast, bread type notes great full on grain mash notes at midpoint and a nice full with a nice drying finish of oak and pepper. Finish is long,smooth and leaves you hungering for another one.

Drinks: No known drinks specifically for this whiskey as now one has really made anything similar in the US. The Old Fashioned was very nice in a clean, spare minamalist way, the Manhattans (both dry and perfect) were also very good if a touch hot. I think it would also make for some outstanding gourmet food pairings also, especially game or seafood.

Cigars: Something mild so as not to lose the nuances. Small natural wrapper cigar.

Final Thoughts: Really quite charming in a understated way. Could be compared to some Genevers of European (non-Scotch) whiskies. Damn cheap if compared almost all microdistilled whiskey of any age. Especially something aged two years or more.

Bottle: Distinctive, short cylindrical bright clear glass with sharp shoulders,
shows the whiskey to excellent effect. Simple eye catching graphics silk screened or printed directly onto the glass of a dry fly fly fishing lure. Nice heft to the bottle and a good grade of clear glass with nice decanter base so it is solid and hard to knock over. Nicely done graphics on the paper band/label. Cork with wooden top makes for decorative but easy opening.

Each bottle is also hand sealed with a notation as to batch number and bottle number within the batch - a nice touch. Bottle is from France - where they seem to make a much better grade of glass and this makes the bottle shine and create a nice presentation.

"The recent cool whiskey that attracted my attention is Washington wheat whiskey from Dry Fly Distilling. It is packed in a liquor-designed bottle, adorned with a fly fishing lure in brilliant red, accented by a red cap and a label with a somewhat metallic-looking background. This bottle is a true work of art. Dry Fly Wheat Whiskey to have official release on August 3rd. On August 7th it will appear in stores. A limit of 2 bottles per person will be in effect. The owners expect the new to wheat whiskey be a hit.

Since it takes a full year to age, Dry Fly's Washington Wheat Whiskey output will be much smaller than the roughly 6,000 cases of gin and vodka the distillery will sell this year. The owners say they'll bottle the new whiskey entirely with friends and family, for this year anyway. According to research Fleischmann and Poffenroth have done, this will be the only all-wheat whiskey commercially made in the U.S. and the first sold commercially here in the past 150 years."

At first appearance, this whiskey shines bright like a freshly polished copper penny. On the nose, it was slightly spicy and a bit hotter than I expected a whiskey at 80 proof to be. After a bit of time, the nose revealed big caramel tones, with hints of butterscotch pudding, tangerines, almonds, tupelo honey and hay.

On the palate, neat this whiskey was very soft, almost like a baby's blanket caressing my tongue, with freshly baked orange scones, cinnamon toast, white pepper and peppermint notes. When I added a splash of water, this whiskey became even softer, with ripe peaches, spice cake, Juicy Fruit gum and grassy notes.

The whiskey had a finish of 25 to 30 seconds, taken neat the finish was heavy on cinnamon, caramel and spice notes while with water this whiskey slowly disappeared with teasers of caramel, nectarines, peaches and mint. My only criticism of this whiskey is that I'm curious to see what this would taste like at a higher proof. I think that if this was 90 or 100 proof versus the current 80 proof it would probably get my top recommendation rating.

With this whiskey and their award-winning gin and vodka, Dry Fly has established itself as one of the premier American artisan distillers and established conclusively that great distilled spirits are here to stay in Spokane Washington.
Highly Recommended.
About.com, cocktails

"Aromas of honeyed apples, chamomile, and oatmeal lead this youthful
whiskey. The palate is sparked with white pepper and just-ripe white peach. Almond brittle adds a sweet tone on the finish."

Dry Fly Distilling is a farm-to-bottle distillery in Spokane, Washington. They are a complete grain-to-glass operation, making vodka, gin and whiskey using only locally grown grains and botanicals. Their two ...
Read More

Other Spirits From Dry Fly Distillery