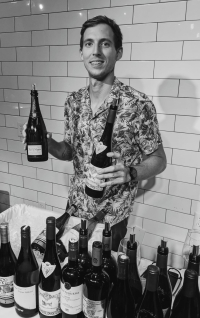 Alex Merkle began his journey in the wine industry while studying at the University of Maryland Baltimore County. His part time job at Jason's Wine & Spirits in Ellicott City quickly became a full time passion - Alex honed his palate, learned the extensive inventory & helped manage the shop for nearly 3 years. After graduation, Alex studied for the WSET level three while continuing in retail wine management. He joined the Kysela team in June 2016 and covered the Maryland territory until August 2017. As a lifelong Baltimore resident, Alex was excited to accept a position on Kysela’s national sales team, where he now manages accounts on the West Coast.

Alex's favorite wine regions are the Rhone, Burgundy, and California's Central Coast. In his free time, Alex enjoys trail running, painting, and exploring everything Southern California has to offer. He has traveled to France and South America with Kysela and has visited many west coast AVAs in his travels.