In 1992, Ancien wines harvested their first two tons of Pinot Noir from four rows atop a knoll in the southwest corner of Carneros. Producing but five barrels, this marked the beginning of Ancien Wines. In the years since, they have continued their pursuit of those rare and special plots where Pinot Noir can rise from great to sublime. They have added to their pursuit of Pinot Noir, the production of its close relative, Pinot Gris, as well as its Burgundian sibling, Chardonnay. For both of these white wines, they closely follow the French artisanal tradition of in-barrel fermentation and aging. 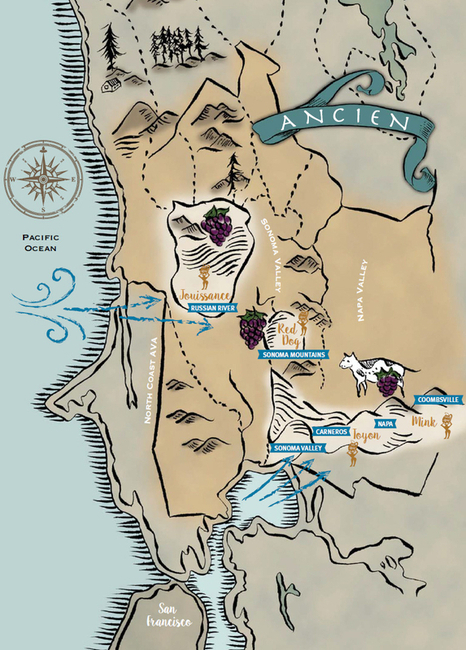 Ancien's quest for great wine begins with the search for the highest quality sites in the range of terroirs in which they work - those they hope to be of “Grand Cru” stature in their separate Viticultural Areas (AVA). Theirs has been a unique approach in that the majority of the vineyards were custom planted in partnership with small scale farmers. Ken Bernards' background in viticultural and clonal research was utilized in a very practical way to optimize each of the planted sites. This has been a long term approach starting with the Mink Vineyard in 1995, then with Toyon Farm in 1998, and continued with the most recent plantings at Red Dog Vineyard. The "long distance relationships” with Kathy Joseph’s Fiddlestix Vineyard in 2003 and Dick Shea’s Vineyard in 2008 are the only exceptions to this approach as the blocks were pre-existing. As it stands, the current lineup includes vines grown in the following viticultural areas: Carneros, Coombsville, Russian River, Sonoma Mountain, Willamette Valley, Santa Rita Hills.