Founded in 1905 by Gabriel Archimbaud, Domaine Clos de Cazaux is now run by his grandsons Jean-Michel and Frédéric Vache.
The Vache and Archimbaud families are amongst the oldest families in the village of Vacqueyras, with their names appearing in the earliest existing clerical registers. The oldest part of the property dates back to the 12th century and belonged to the Knights Templar. At this time a local farmer was put in charge of rearing the livestock and cultivating the land on behalf of the Knights Templar. This farmer was called "Chasal", a name which over the years became "Cazaux", the current name of the domaine. 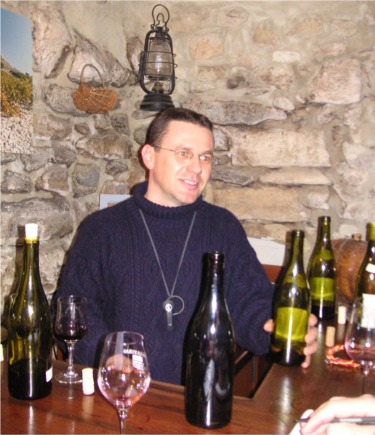 The first vines were planted in the 19th century, on the poorest soil, and only provided enough wine for the family's own consumption. During the 20th century, vine-growing became the principal agricultural activity in the region – grapes were the only crop cultivated after the catastrophic frosts of 1956 decimated the olive groves and orchards of cherry and apricot trees.

In the early 1950s, the Archimbaud family became pioneers in the wine trade, bottling and selling their wine under the name ‘Clos de Cazaux’. The family extended the domaine by regrouping the land around their buildings to create a property of 20 hectares. At the same time the family acquired 40 hectares of woodland within the Dentelles de Montmirail, near Gigondas, together with the ruins of the "Tour Sarrasin".

The next generation - daughter Lucette and her husband Maurice Vache took over in the 1970’s and dedicated themselves to cultivating and improving the vines, including transforming the Gigondas woodland into 15 hectares of vineyard slopes. In the early 1980’s, tasting rooms were created at the domaine and the couple began selling their wines abroad - something almost unheard of in Vacqueyras at that time.

In the 1990’s their sons joined the business - Jean-Michel in 1990, after obtaining his professional qualification in the production and sale of wine; and Frédéric in 1998, a professional oenologist trained in Dijon with wine-making experience in South Africa. Jean-Michel and Frederic have since taken over & run the domain with the same care and passion as their parents and grandparents.

The vines are cultivated with utmost respect to the environment. Only Bordeaux mixture (antifungal agent made of a solution of copper sulfate and quicklime) and sulfur is used in the phytosanitary and vineyard treatment. Harvest is manual, and only the best grapes are selected during a green harvest in the summer.
The vineyards are planted to 60% Grenache, 30% Syrah and 10% Mourvèdre. Annual production is 10,800 cases, with an average yield of 28 hl/ha.