La Fortezza is located in the heart of the Benevento province, in a commune called Torrecuso. Torrecuso extends on the eastern side of the Taburno-Camposauro massif, where the slopes are a continuous alternation of vineyards, woods and small fields. Its highest peak, Mount Taburno, offers shade only at the end of the day - otherwise the vineyards are sun-drenched, optimizing the sugar content, aroma and acidity of the grapes. 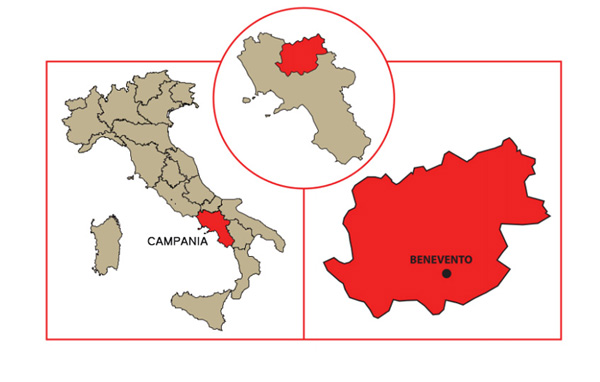 Benevento represents about 40% of the vineyard area of ​​the Campania Region. While they believe that "wine is made in the vineyard", their real strength derives from a mix of soil quality (clay and limestone, volcanic rock), sun exposure, altitude and care of the vineyard. Their Aglianico del Taburno vines are abundant, allowing for a careful selection for the various ranges, and providing high quality for wines such as the Reserve, whose grapes come from vines 70+ years old.

Founded in 2006, La Fortezza was born from the great passion of its founder, Enzo Rillo. The cellar is located at the heart of the vineyards, completely covered with stone and well-integrated into the surrounding landscape. The upper level showcases beautiful views of the Apennine Mountains that separate Campania from Puglia, while the lower level houses the production facilities. Barrel vaults are part of their aging room, entirely covered with terracotta bricks and partly excavated in the tuff (volcanic rock). La Fortezza's production capacity is around two million bottles.