The creation of Escutcheon Brewing Co. started with the friendship between two guys who really like beer. John Hovermale and Art Major met when John was working to get a different brewery open in Winchester. That brewery didn’t work out, but their friendship did. Together, pint after pint, they talked often about how they would “do it the right way” if they were to start a brewery of their own.

John, a master brewer, began at the Siebel Institute in Illinois more than fifteen years ago and has worked for breweries in Vermont, Maryland and Mississippi. Art is an accomplished entrepreneur who has founded other successful businesses. And although he hasn’t had the same experience brewing, Art feels that he has taken so much beer out of the system that it was time to put some back in. The combination of their backgrounds and experiences, as well as their passion and drive to create good beer, were the perfect ingredients to build Escutcheon Brewing Co. 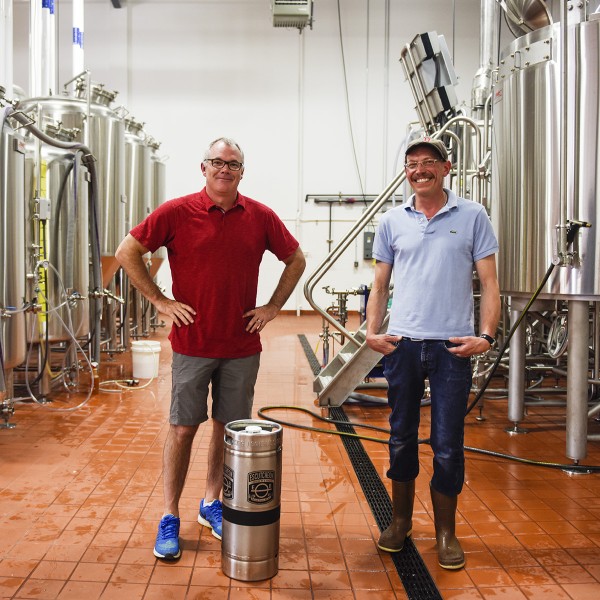 Art & John with their first keg

Art spent some time in the merchant marine and wanted to incorporate that experience into the brewery. The brand name, the names of the beers and even the design of the taproom all relate back to that.

“When he said he wanted to have our theme be related to the industrial maritime industry I thought, ‘Sure, we’re 150 miles from the ocean – so that makes sense’. What a jerk.” - John Hovermale

In the mid-1800s, an almost 30-year-old man named Samuel Plimsoll attempted to become a coal merchant in England. Although he failed and was reduced to destitution, he learned to sympathize with the struggles of the poor. When his good fortune returned, he focused a majority of his efforts into creating regulations for what were known at the time as "coffin ships". The corrupt owners of these overloaded and often heavily insured ships would risk the lives of the crew, knowing that they would benefit whether the ship sank or arrived at it's destination.

After many years of fighting, Plimsoll, who was then a member of the British Parliament, championed a bill known as the Merchant Shipping Act. This new law forced ships to place a mark - a Plimsoll Mark - on the hull that indicates the safe limit to which a ship may be loaded, ie. the maximum draft (or how deep the ship sits in the water), saving countless lives in return

In honor of Samuel Plimsoll, Escutcheon Brewing Co.'s logo is a Plimsoll Line, forever reminding you, our drinkers, to "Mind Your Draft"!