The Piemaggio estate, founded in 1954 by Larissa Karaban, is located at Le Fioraie, a hamlet on the northwestern side of the Castellina in Chianti territory, along the road to Poggibonsi, in the heart of the historical Chianti Classico. Piemaggio is the name of the farmhouse in the center of the estate, which dates back to the 11th/12th century. There are remains of an old church (‘pieve’) on the highest hillside of the estate (‘maggiore’), which is where the name ‘Piemaggio’ derives. The church remains bear witness to the agricultural vocation of the site: religious orders in the Middle Ages acted as the custodians of agricultural knowledge, handing it down throughout the centuries. 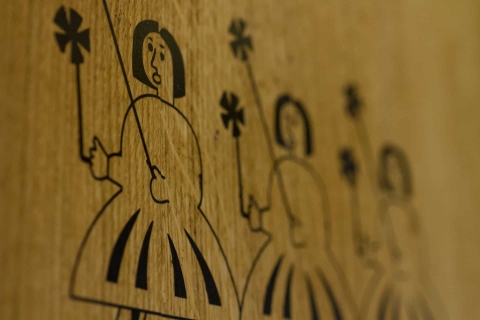 Le Fioraie translates to ‘the flower sellers’, hence the winery’s labels that feature a drawing of three flower sellers. Legend has it that the name of Le Fioraie is linked to the pilgrim friar who, after walking a long distance in excessive heat, fainted after passing by the estate. Three sisters who were local flower sellers came to offer the friar some wine. He thanked them and resumed his pilgrimage, but he never forgot the place: a few months later he returned to start building a church and planting vines.

The vineyards at Piemaggio cover over 12 hectares (30 acres). The vines, all trained with the Guyot system, grow on a number of separate hillsides with south and south-westerly aspect, at altitudes of 380-480 meters above sea level. The galestro and alberese soils, part of the geological heritage of Chianti Classico sites, guarantee perfect drainage of the vineyards.
At Piemaggio, the Sangiovese grape variety reigns supreme, covering about 10 hectares in total. They also grow Colorino, Canaiolo and Ciliegiolo (all typical Chianti Classico grapes), as well as Cabernet Sauvignon and Merlot grapes for IGT wine. 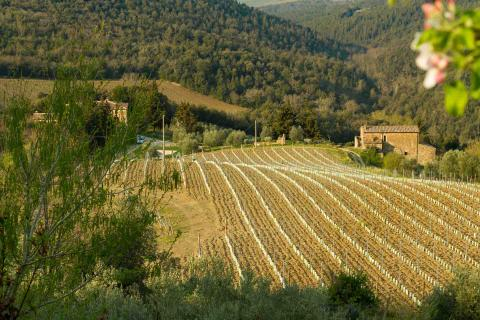 600 olive trees grow on the estate's grounds, producing an extra-virgin olive oil with all the typical features of a Tuscan oil from the Chianti hills.

The cellar at Piemaggio is roughly 1 km from the farmhouse and the vineyards. It was modernized in 2014, with the purchase of new 100HL steel vats for controlled temperature fermentation. The Sangiovese ages in 110HL vats in fiberglass concrete. The cellar also hosts 25HL French oak barrels as well as 5HL tonneaux, also made of French wood, used for the Chianti Classico Le Fioraie, Chianti Classico Riserva Le Fioraie and IGT Piemaggio.