Owner Romaric Chavy, who took over the estate in 2014, is the eighth generation to make wine in his family. Romaric learned from his father, Hubert Chavy, who founded the winery in 1982. Chavy-Chouet is one of the oldest families in Puligny-Montrachet. The Ropiteau family (on his mother's side) is the oldest one in Meursault.

Hubert, who was known not only for his winemaking but also for his charisma, was able to train Romaric for a few years before his passing in early 2014. Romaric has become a smart vigneron with a natural talent for winemaking. After six years at a specialist winemaking school and with plenty of experience in winegrowing and vinification around the world under his belt, Romaric has given the estate a makeover, and he follows an approach that combines rigor, tradition, and innovation. 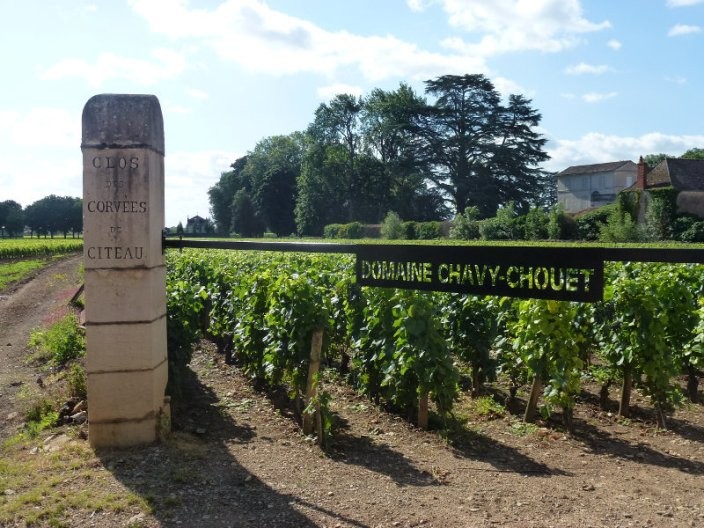 Chavy-Chouet is a 15 hectare-domaine (37 acres) that produces wine from 14 A.O.C.'s (80% White, 20% Red). The vineyard is divided into 70 parcels planted to vines that are 40 years old or more. Romaric uses Gillet as his cooper, who blends oak from Nevers, Limousin and Allier forests. The barrels receive medium toast. Following his father’s methods, Romaric does not fine or filter his wines, instead allowed their purity to shine through.

The winery covers 1,300 square meters, including 800 square meters of cellars, and is a mix of ancient and ultra-modern. The set-up allows Romaric to work hand-in-hand with nature and meet his high demands for quality. The wines are put into barrels using gravity and intervention is kept to a minimum.

A group from Kysela visits Chavy-Chouet in January each year, carrying on a tradition of tasting from barrels, then bottles, and then finishing with some mystery wines. The group must guess the appellation and the vintage of wines being poured from magnums...a tough job, but somebody has to do it.

"A corked bottle of 1983 Pichon-Lalande led to my inaugural visit to this Meursault domaine. My precious Pauillac corked, I ordered a bottle of 2015 Bourgogne Les Femelottes from Chavy-Chouet at Brat restaurant in London. It was so damn delicious that I ordered another and emailed winemaker Romaric Chavy that I must visit pronto.
Arriving at the gates, I noticed that there was no doorbell or knocker. When I was noticed loitering outside, the gates finally opened and Romaric Chavy informed me that they do without a doorbell because they have so many visitors. Chavy is a young and confident guy, very media-savvy, which is uncommon in Burgundy. He worked abroad in various countries including South Africa and Greece before taking over Chavy-Chouet at the age of just 22. Before tasting through the 2017s, which had all been bottled, I asked about the background of the domaine.
“The holdings come from two sides of my grandfather’s family. Chavy comes from Puligny-Montrachet, and his wife was part of the Ropiteau family in Meursault. Back then, he sold the wines to Bouchard Père. It was my own father, Hubert, who started bottling his own wine when he married his wife from Pommard and bought this house in Meursault. I started at the domaine in 2006 when we were still selling off grapes. I already had a good network [of potential clients] and so we started to bottle everything and develop exports. My father passed away in 2014. Now we have 15 hectares, mostly old vines located in five villages, producing around 90,000 bottles, of which around 90% is exported. We have three or four people working full-time and we work in a classical way - lutte raisonée and ploughing in the vineyard. This year we approached half the vineyard organically, but when the pressure became too high, we switched back and used spray. We press the fruit for two hours, with a 24-hour debourbage, and then ferment in barrel using natural yeast, a maximum of 20% new oak for between 9 and 12 months, with no lees stirring and a light filtration before bottling. We try to keep as much natural CO2 as possible.”
It is always a pleasure to discover a producer who has skimmed under your Burgundy radar for some time. Chavy-Chouet has built a loyal following here in the UK and I can understand why. These wines are very pure, terroir-driven and focused. Yet they are not challenging or pretentious and give much sensory pleasure. As I mentioned, you can splash the cash on a Premier Cru white if you wish, but do not ignore the 2017 Bourgogne Blanc Les Femelottes. It is unequivocally Village Cru in quality – no real surprise given that its vines are adjacent to Puligny-Village. The 2017 Meursault Charmes is an absolute knockout, whilst the monopole Clos des Corvées de Citeau is superb. This is an address I will definitely return to in the future, though I have made a mental note to phone ahead, so that I can actually get in. - Neal Martin"