The ongoing pursuit of excellence best defines the career of José María Ruiz, Pago's founder and principal shareholder. In 1982 the Restaurante José María opened its doors in Segovia and the ideas of the young and curious man begin to take shape. José María Ruiz began by transforming the very concept of wine as it was served in the hearty Castilian Taverns. He started by eliminating the traditional pottery pitcher in which they were served and started serving bottled wine, caring meticulously about the presentation, right temperature, conditions, and the serving protocol. 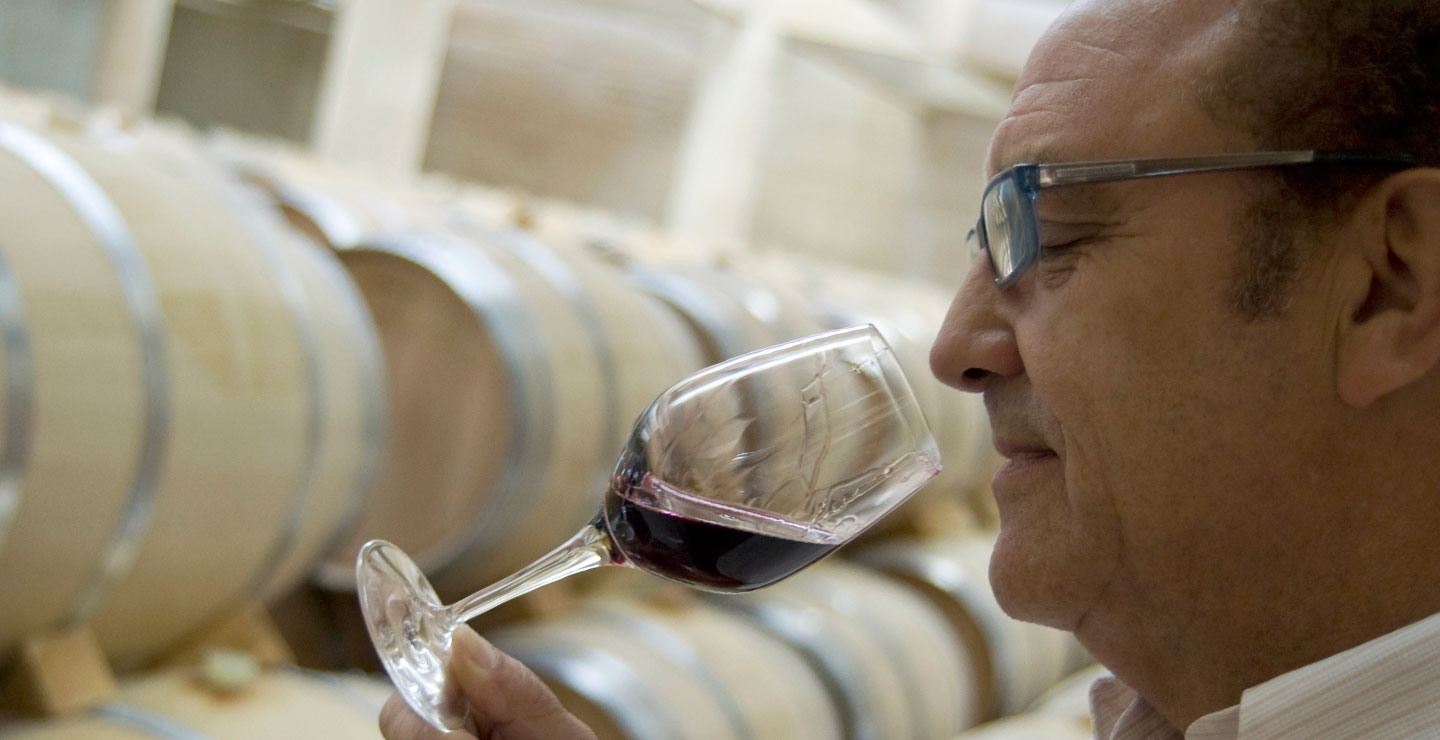 The Ribera was then unknown as wine making region, but Jose María's vigorous efforts to improve the role and treatment of wine in his restaurant had led him to become an ardent explorer of the land and the wines of the area. It was clear to him from the start that it was from this region where his wine, perfectly matched to the star dish of his restaurant and the region, cochinillo (roasted suckling piglet), had to come.

In 1987 José María Ruiz lead a group of wine loving Segovians and together they conceived the idea of creating a winery in a region that can produce good reds. Three reasons made them choose the hillsides of Carraovejas, in Peñafiel. First, Peñafiel has been historically, the hub of the Ribera del Duero wine making region, and the area with more potential of all the Spanish wine making regions. Second, its proximity to Segovia. And third and probably the most important reason, because the elders of the village remembered the hillsides of Carraovejas as the best grape ripening site, as later confirmed by numerous studies.

Naturally, choosing the right location, land and climate was essential. Three kilometers outside Peñafiel, in the sunny enclave formed by the valleys of the Botijas River (a tributary of the Duero River), the land enjoys a microclimate created by the sweetening influence of the Duero River, the dominant west winds that keep the vines healthy and the south facing aspect of the softly rolling hillsides, sheltered from the damaging effects of the north wind and devastation from the spring frosts and autumn freezes. The perfect conditions for a thriving vineyard: sun and air. 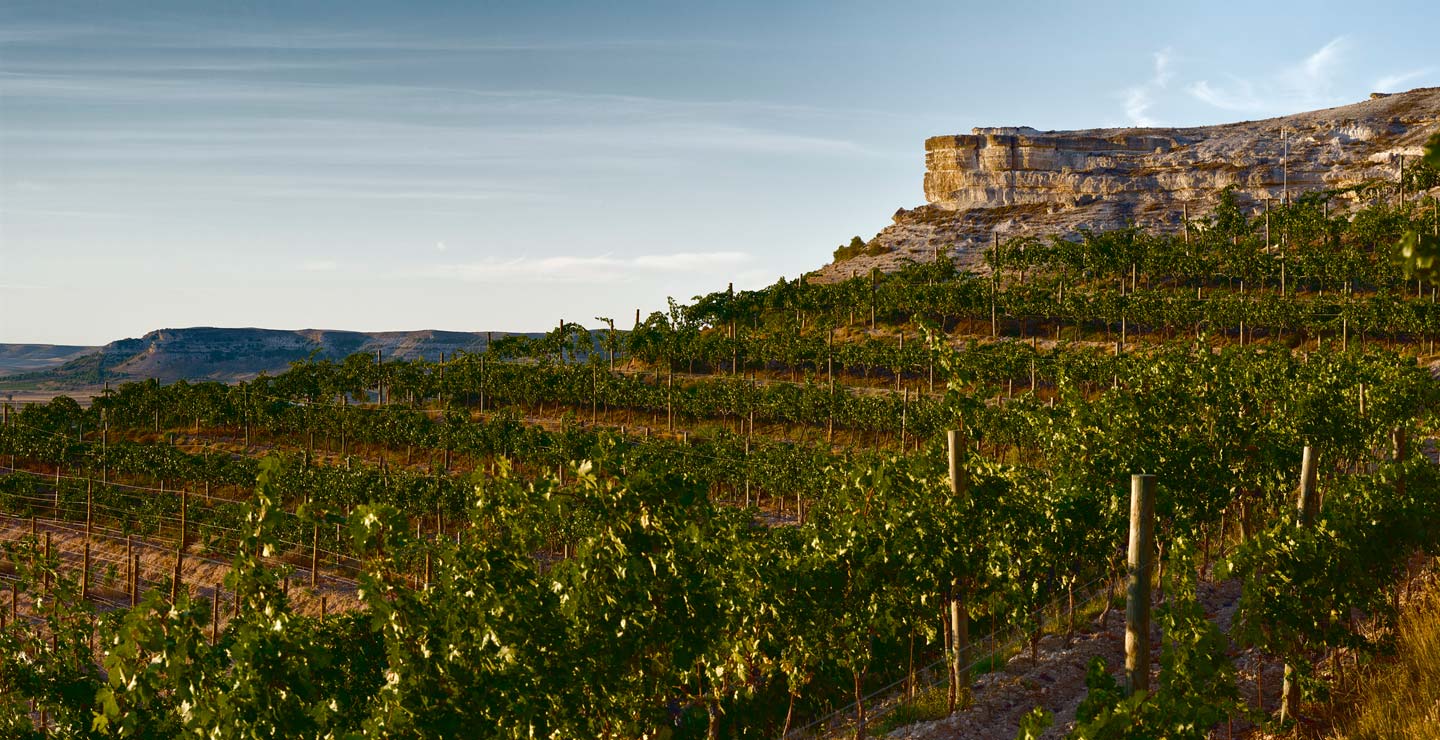 They had found the place, and it was Carraovejas. Using experience and technology to optimize the already favorable conditions of the area, they were able to make the first Ribera del Duero wine containing 25% Cabernet Sauvignon (at a time when Tinto Fino ruled absolute). They were also pioneers in bringing French oak barrels to the Ribera del Duero, as well as installing drip irrigation at the estate.

Today the Finca comprises 140 hectares, all red grapes, planted 75% to Tempranillo and 25% to Cabernet Sauvignon. The vines are situated on the southern flank of Carraovejas ridge at 850 meters above sea level. The local micro-climate is harsh and dry: cold winters, hot summers and an annual rainfall less than 400 mm. The soils are low in nutrients with a mix of limestone, chalk and sand. Carefully metered drip irrigation controls vine stress, which along with the terrain, soils and micro-climate, produces grapes of optimum concentration and ripeness, vintage after vintage. Production is at 50,000 cases and the winery uses a 50 - 50 combination of French (Allier) and American (Ohio and Missouri) oak of which 33% is new oak each year. They currently make Crianza, Reserva and Gran Reserva styles; no Tinto Joven here. Only 10% of their wine is exported. The maceration of the reds occurs in fat stainless steel tanks suspended off a single plane of waffled stainless.

"Pago de Carraovejas has grown in different regions (Ribeiro, Rueda, Ribera del Duero, now Rioja Alavesa, maybe more in the future...) and has increased their land under vine because of the high demand for their wines. They have created a group called Alma Carraovejas that includes a starred restaurant, Ambivium, on their property in Peñafiel. They are also certifying their Pago de Carraovejas vineyards in organic farming. The range has been simplified to three labels, abandoning the Crianza and Reserva labels."

"Pago de Carraovejas has earned a place among Wine & Spirits' Top 100 Wineries. Wine & Spirits Magazine will feature Pago de Carraovejas in their 2016 Annual Buying Guide, thanks to the brand's outstanding performance in their tastings. W&S consider this their highest honor: Each year, their panels and critics taste more than 15,000 wines, all under blind conditions, looking for the most distinctive and delicious wines to present to their readers. The Top 100 Wineries earned the highest scores in their tastings this year, with the most consistent performance across their entire range of wines."
- Wine & Spirits Magazine (TOP 100 issue, October 2015)