Tanzanite Winery was founded in 2003 by Melanie van der Merwe. The winery's name is inspired by Melanie's birthstone - the rare, beautiful and highly sought-after Tanzanite - and symbolizes her passion for creating unique sparkling wines in the time-honored way. 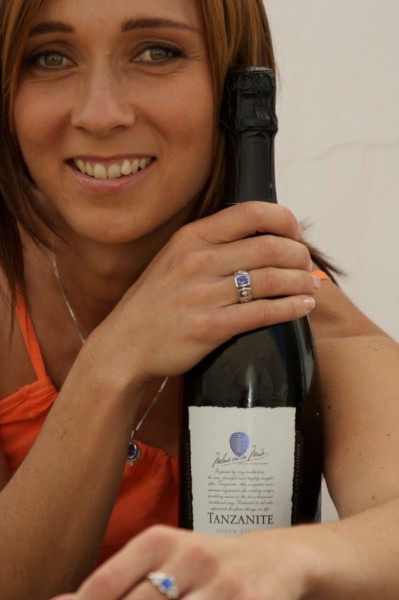 Melanie grew up in the Hex River Valley where her late parents farmed with export table grapes. She fell in love with the grapes and vineyards and decided to venture into winemaking. She studied BSC Agriculture at Stellenbosch University, worked in France at Louis Roederer Champagne, Moet & Chandon and Pommery in 3 vintages. She worked at Distillers Corporation as winemaker from 1994-1998. In 1998, Distillers Corporation and Stellenbosch Farmers Winery merged and formed Distell. She was appointed as sparkling winemaker of the group. She resigned in 2006 and started her own small sparkling wine production in 2003 which she launched in 2006.

Today Melanie runs Tanzanite Winery with help from her husband, Wentzel, and daughters Maré and Hané. As they do not own vineyards, Melanie buys grapes from Robertson, a tradition she's been following for 15 years. Robertston is the only area in the Western Cape with chalky soils - a crucial component to MCC production. The base wine made from these chalky soils shows long ageing potential and specific flavors crucial for the Tanzanite style.

Melanie hires cellar space and makes her base wine in the old traditional French way of hand harvesting and whole bunch pressing. Malolactic fermentation is done on all base wines as this gives the wine soft, creamy and elegant tones with maturation on the lees. Wines are blended proportionally to the year’s vintage and quality. Mobile lines do the filtration, stabilization and bottling. The bottled wine is stored in Worcester, where they work with the MCC. Riddling is done by hand, then they hire in a mobile disgorgement unit to disgorge the wine. Finally the bottles are washed and labeled using a mobile line.

All of these mobile processes are done by temporary hand labor at least twice a year. Cellar hand Wilma, along with her family and friends, help Melanie with all the hand labor processes. The production does not have the need to employ permanent workers, so Melanie started working with disadvantaged individuals in the Worcester Community. She works mainly with women, coordinating their work schedules around their family schedules.

Melanie & her wines have garnered the attention of publications and critics around the world, including Platters, Oprah Magazine and various national and international competitions. She was nominated as business woman of the year & named one of the twenty leading winemakers in South Africa.