Founded in 1999, Viña El Principal was originally a partnership between Jorge Fontaine, owner of the Hacienda El Principal, and the French winemaker Jean Paul Valette, now deceased, who was the former owner of the famous Premier Grand Cru Classé Château Pavie in Saint-Émilion. Their goal was to produce a top-quality range of red wines that fully reflected the Chilean soul and the Valette family’s heritage and experience in making fine wines. The El Principal terroir, located at the foot of the Andes Mountains in the Alto Maipo Valley (D.O Maipo Andes) was perfect for their project; its singular combination of climate, soil type, and altitude made it ideal for producing wines with character, unique identity, and extraordinary quality.

The partners selected 54 hectares of the property to plant Cabernet Sauvignon and Carmenere varieties. Ten years later, the first vintage of the winery’s icon, the 1999 El Principal, was successfully released earning the international recognition as one of the Ultra Premium Chilean wines and confirming the potential of Chile as a world-class denomination of origin.

Today, El Principal is a family-owned winery. German shipowner Jochen Döhle bought the winery in 2005 and later partnered with the renowned Chilean Said-Handal family, who acquired 50 percent of the ownership in 2013. From the beginning, Mr. Döhle has been determined to continue making high quality wines, and his strategy has included planting additional hectares, searching for new varieties, and investing in equipment and storage facilities. The Said Handal Family acquired the 100% of the property at the end of 2018. The determination of the family is to keep creating wines who achieve the best quality that the terroir of Maipo Alto can give, but at the same time keep the main soul of the only four wines they make.

The winery was named after the Picunche Chief Andetelmo, known as “El Principal”, master of the lands where our winery at the foot of the Andes Mountains in the Alto Maipo Valley is located today. The vision of this indigenous leader, as well as his noble and peaceful character earned the respect of the Spaniards and inspired a history of cooperation and cultural exchange that remains in place today. 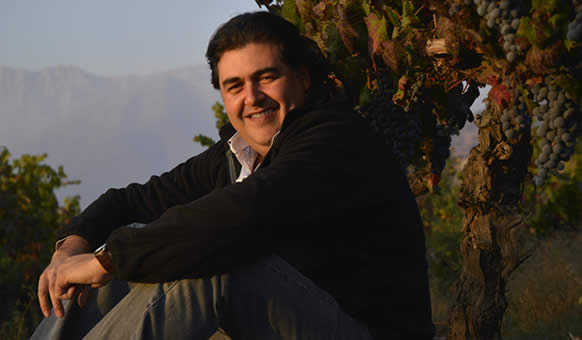 Winemaker Gonzalo Guzmán has led the enological team as Technical Director of Viña El Principal since 2005. During this period, Guzmán's quest has always been the same: to achieve the purest expression of the terroir by promoting the personality and uniqueness of each of his wines. Under his direction, El Principal has slowly evolved from a Cabernet Sauvignon-Carmenere blend to a more sophisticated and elegant blend of Cabernet Sauvignon and Petit Verdot. He has also made fine adjustments to the Memorias and Calicanto wines to increase their freshness and complexity. In his passion to discover what this terroir is able to produce, Guzmán has planted new Spanish varieties such as Verdejo, Albariño, Graciano, and Mencia with great success. In 2014 Viña El Principal launched Kiñe, the first New World Verdejo wine.