In 1986, brothers Christophe and Fabrice Delorme, along with their father Francis, decided to dedicate themselves to their passion for wine. They bought an estate in Tavel with the goal of producing the greatest wines in each appellation while preserving the environment. Within a decade, they had achieved that goal, and continued getting better and better each year. Domaine de la Mordorée produces some of our best wines, and they have selected and maintained some of the finest terroirs. Their Châteauneuf-du-Papes, Lirac Reds & Whites, and Tavel Rosés are among the most highly rated of the region.

Unfortunately, in 2015, the remarkably talented Christophe passed away at the age of 52. Christophe was highly respected and regarded by Fran Kysela, and they enjoyed a wonderful business partnership for 21 year. He was also highly regarded by Robert Parker Jr. of The Wine Advocate, who pinned Mordorée as "one of the world’s greatest wine estates". In a 2007 issue of the Wine Advocate, Parker said:

"With 135 acres spread throughout some of the most impressive appellations of the southern Rhône, Christophe Delorme and his brother...have done nothing but produce one exquisite wine after another. Of course, the top cuvees of Châteauneuf-du-Pape are rare and expensive, but this is a place to find terrific Cotes du Rhones and Liracs as well. Delorme is equally adept at dry whites as well as reds, and turns out some stunning roses both under the Cotes du Rhône and Tavel appellations..."

Christophe’s legacy and his talent live on through his daughter Ambre, as well as a talented team at Domaine de la Mordoree that includes winemaker Rémy Chauvet, who worked as Christophe’s cellar manager. Jeb Dunnuck praised the estate for the quality of their first vintage without Christophe, saying the Domaine was “obviously still in incredibly capable hands.”

Mordorée’s vineyards consist of 55 hectares (135 acres) on 38 different parcels, containing a rich, wide range of soils and climates. The soil is a mix of clay, chalk and sand with pebble stones. The vines are trained according to two methods: 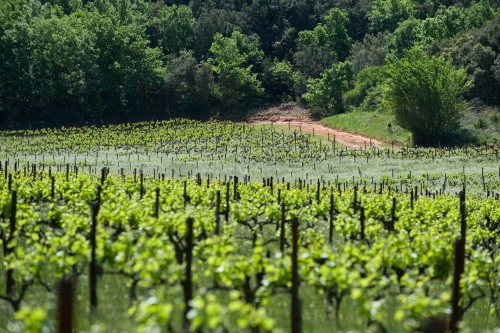 Mordorée follows the culture raisonnée method, intervening in the vineyard only when necessary. The yield is reduced in the vineyard by ébourgeonnage (de-budding in spring) and vendanges vertes in summer (green harvesting). The top wines are aged in special oak barrels like jupille for 10 months. No expense is spared at this domaine to achieve quality.

"Since the untimely death of Christophe Delorme last year, the winemaking at Domaine de la Mordorée has fallen to Rémy Chauvet, who was the cellar manager under Christophe for a number of years. Based on these 2015 barrel samples, the estate is obviously still in incredibly capable hands. - Jeb Dunnuck"
- Robert Parker's The Wine Advocate (Issue 227, October 28th 2016)

"I've yet to see these guys put a foot wrong, and regardless of the vintage, they're able to make superb wines. In addition to their terrific Châteauneuf du Papes, they continue to raise the quality of their Lirac and Côtes du Rhône releases. Also, while these all have the ability to drink nicely on release, they age beautifully. - Jeb Dunnuck"
- Robert Parker's The Wine Advocate (Issue 215, October 2014)

"While my tight travel schedule didn't permit a visit to this fine estate on the eastern side of the Rhône, the Delorme family sent samples of the 2019s to my blind tasting at the Fédération, and I was able to taste a few additional wines hand-carried from the domaine to a small dinner in Châteauneuf-du-Pape. The estate's vineyards have been certified organic since 2013, but the wines will be Demeter-certified biodynamic starting with the 2020 vintage. A prospective blend of the 2020 Châteauneuf du Pape La Reine de Bois looked quite promising.

The two older vintages sampled, the 2011 and 2001, show just how important it is to know the vintages and monitor their evolution. The 2011 La Reine de Bois—at least this bottle—is still drinkable but appears to be on its downslope, while the outstanding 2001 La Reine de Bois still has a few years ahead of it. While I was short of rating this bottle at the lofty 100 points it has received previously, it's a beautiful wine I'd be happy to own and drink. Still, it's a reminder that even "perfect" wines have lifespans and that 20 years after a vintage, some bottle variation is to be expected."